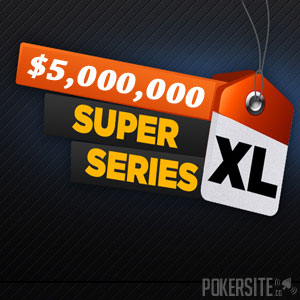 888Poker has announced a schedule of sixty-four events for its $5 million guaranteed Super XL Series plus a Champion of Champions leaderboard competition.

The Super XL Series is back! 888Poker has released details of its seventh Super XL Series, and it promises to be the biggest Super XL Series yet. Featuring sixty-four tournaments over eleven days of action, a minimum of $5 million will be up for grabs, plus a package to next year´s WSOP of Poker Main Event for one lucky player.

The action starts on Thursday January 19 with three “Opening Events” to suit players of all bankrolls and continues through to Sunday January 29, when five “Main Events” will take place – including a Super XL Main Event that has a guaranteed prize pool of $1.5 million. It promises to be something special to start the New Year!

A Variety of Formats and Disciplines

The schedule for January´s Super XL Series is packed full of variety. NL Hold´em tournaments are scheduled at “slow”, “regular”, “turbo” and “super-turbo” speeds, with formats such as KO, SNAP, and 6-Max included in the mix. There will also be a $100,000 guaranteed “Crazy 8” tournament on the opening weekend of the series with a buy-in of just $88.00.

The five “Main Events” on the concluding day of the series have buy-ins ranging from $5.00 to $1,050. They are scheduled around the same time as the site´s regular $100,000 guaranteed Sunday Challenge – meaning that the guaranteed prize pools on Sunday January 29 will amount to more than $2 million. Players should also watch out for a Mega-Satellite on Sunday afternoon, giving away fifty seats to the Super XL Series Main Event.

The Champion of Champions Leaderboard Competition

Throughout the Super XL Series, 888Poker will be running a Champion of Champions leaderboard competition. Players who cash in any of the sixty-four Super XL events will be awarded points based on their finishing position, the buy-in for the event ,and the number of players who compete in the event. The fifty players at the top of the leaderboard after the final Super XL event has finished will each win a prize.

The top eighteen players on the leaderboard will also be invited to a Champion of Champions tournament on Tuesday January 31. The Champions tournament has some superb prizes up for grabs including a $12,000 package to next year´s WSOP Main Event, a $3,000 buy-in to a WSOP side event, and $1,425 in tournament tickets shared between the remaining sixteen players. It is going to be a very good night for one Champion!

To enable as many players as possible to get involved in the Super XL Series, 888Poker is giving away entries into Super XL Freeroll Qualifiers. Every player registered at 888Poker will be receiving an email with a link to their two free tickets and instructions on how they can acquire extra freeroll qualifier tickets by completing daily challenges.

A Super XL Freeroll Qualifier is scheduled to take place every day until the start of the series – each giving away multiple entries into the most valuable events in the Super XL Series. Some of freeroll qualifiers are timed for the benefit of Asia-Pacific players. As fewer 888Poker players reside in the Asia-Pacific region, European players who stay up late (or who wake exceptionally early) might be able to find extra value in many of the freeroll qualifiers.

Plenty of Stars Involved in the Action. Will You Be?

Several stars of the online poker world are expected to play in the Super XL Series. In an interview with a German poker magazine, Dominik Nitsche said he intends to play in as many of the events as possible and live-stream his action on Twitch. Other 888Poker ambassadors expected to be aiming for the top of the Champions leaderboard include Kara Scott, Chris Moorman and Sofia Lovgren.

If you fancy testing your skills against some of the world´s leading online poker players, and you do not yet have an account with the site, register today with 888Poker and you could qualify for up to $88 in free poker money plus an exclusive 100% first deposit bonus up to $600. It´s going to be 888Poker´s biggest ever Super XL Series next month. How badly do you want to be involved in the action?