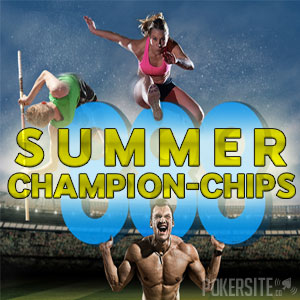 Last August, 888Poker ran a mini buy-in tournament series called the Summer ChampionChips to coincide with the start of the Olympic Games in Rio. Such was the success of the series that the site is re-running the promotion once again from next Sunday.

The freeroll satellites are already taking place and continue until next Saturday. Any player who has made a real money deposit into their account is eligible to play in the freeroll satellites. So, if you fancy winning your share of the Summer ChampionChips prize pool, make sure you visit 888Poker today.

More about the Summer ChampionChips

Qualify for Free via the ChampionChips Freeroll Satellites

As mentioned above, players who have made a real money deposit into their 888Poker accounts have the opportunity to qualify for free for tournaments in the Summer ChampionChips series via three-times-daily freeroll satellites. These take place each day at 12:05pm, 6:35pm and 11:35pm and award the top fifty players in each freeroll with a seat in the target tournament.

$3,000 Up for Grabs in Leaderboard Competition

Over the eighteen events of the Summer ChampionChips, 888Poker is running a “Winners Gallery” leaderboard competition. The leaderboard is not just for winners, but for every player who takes part in the Summer ChampionChips series, as 888Poker will be awarding points in each event based on each player´s finishing position, the event buy-in and the number of players that take part in the event.

There is a $1,000 cash prize up for grabs for the player who tops the leaderboard competition at the end of the series, plus another $2,000 in cash prizes and tournament entry tickets for the next 199 players. With twelve of the eighteen events having buy-ins of $5.00 or lower, the “Winners Gallery” leaderboard competition gives every player the opportunity to add a valuable prize to their bankroll.