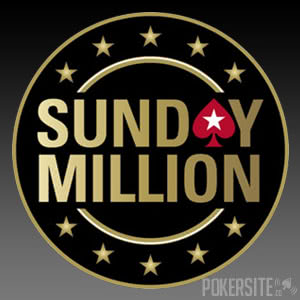 Players have until 2:00pm (ET) tomorrow to make a deposit into their PokerStars accounts and play in a freeroll awarding 200 seats for the $10 million event.

This coming Sunday (April 2nd), PokerStars will be celebrating the 11th anniversary of its Sunday Million tournament by hosting a special event with a $10 million guaranteed prize pool. The anniversary tournament gets underway at 2:00pm (ET), has a direct buy-in of $215.00 and three hours of late registration. During late registration, the option exists to re-enter up to three times.

Prior to the tournament, PokerStars is hosting dozens of last-minutes satellites with up to 1,000 seats for the Sunday Million guaranteed as prizes in each. The site is also hosting a special promotion for depositing players that consists of a free-to-enter hyper-turbo satellite giving away 200 seats for the target event, plus a random prize of up to $10,000 in cash.

The free route into the anniversary Sunday Million tournament is available to existing PokerStars players who make a deposit (min $25.00) into their account before 2:00pm (ET) tomorrow using the PokerStars bonus code “SUNDAYFREE3”. Every player making a deposit will receive a ticket to a freeroll Sunday Million hyper-turbo satellite and a random prize ranging from an entry to an All-In Shootout with a $10,000 prize pool to $10,000 in cash.

It is a good idea not to leave the deposit to the last minute, because the freeroll Sunday Million hyper-turbo satellite gets underway at 1:47pm (ET) and only has twenty minutes late registration. Furthermore, the freeroll satellite is capped at 100,000 players and it is conceivable that the cap will be reached considering the low minimum deposit required and the value of the prizes up for grabs – 200 seats for the Sunday Million and $1,000 in cash for the winner.

What if You Don´t Win a Seat in the Freeroll?

If you don´t win a seat in Saturday´s freeroll, there are plenty of other opportunities to qualify for the anniversary Sunday Million event. PokerStars will be hosting a special VIP Bash on Saturday afternoon with a 1,000 StarsCoin buy-in that guarantees 100 seats for the target event, plus there are plenty of Spin & Go qualifiers and On Demand satellites. There will also be four mega-satellites in the three hours leading up to the start of the event on Sunday:

If you manage to qualify into the anniversary Sunday Million tournament, be sure to take your seat within thirty minutes of the tournament starting. At 2:30pm (ET) precisely, PokerStars will select eleven tables at random and award the ninety-nine players sitting at them a €530.00 tournament entry ticket to a Monte Carlo Mega Satellite starting at 2:35pm (ET).

The Monte Carlo Mega Satellite guarantees fifty €8,500 packages to the PokerStars Championship Main Event between April 29th and May 5th, and includes the Main Event buy-in, accommodation and a contribution towards travel expenses and spending money. That´s quite an incentive to deposit $25.00 into your PokerStars account before 2:00pm (ET) tomorrow, and here is a taste of what you can expect if you finish in the top fifty places in the Monte Carlo Mega Satellite.

Not Yet Taking Advantage of the Opportunities at PokerStars

If you are not yet taking advantage of the opportunities at PokerStars, now would be a great time to get involved. PokerStars is offering players a 100% match bonus on their first three deposits up to $600 (or currency equivalent), and allows new players a generous 120 days to clear the bonus. To find out more about the opportunities available, and the generous first deposit offer, head over to my review of PokerStars and I will see you at the final table of the Sunday Million some time on Monday morning!