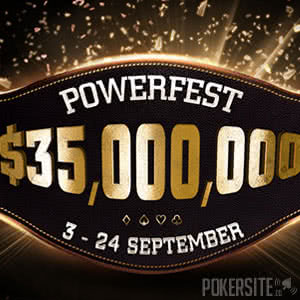 Despite suffering significant overlays in the last series, Party Poker is going head-to-head-to-head against PokerStars and 888Poker once more in September.

The result was carnage. Despite paying out $7 million more than its advertised series guarantee, Party Poker´s PowerFest overlaid in several of its key events (including a $210,000 overlay in its Main Event) and was only rescued by several High Roller events surpassing their expectations.

Undeterred, Party Poker has announced its next $32 million guaranteed PowerFest series will run from September 3rd to September 24th – around the same time as PokerStars will be running its World Cup of Online Poker (WCOOP) and 888 Poker has planned to run an XL Eclipse Championships.

Madness or a Viable Business Opportunity?

Probably the former. Although PowerFest V paid out $7 million more than its advertised series guarantee, Party Poker donated the tournament entry fees from its Super High Rollers event to charity ($64,500), overlaid by six-figure amounts in several million dollar guaranteed events and – on the first Saturday of the series – overlaid in thirteen out of nineteen tournaments.

This time around, Party Poker is scheduling even more million dollar guaranteed events – ten to be precise. Although many of these have a phased tournament format with multiple entries allowed or five-figure buy-ins, it is hard to imagine where Party Poker is going to find the players against the more valuable WCOOP series or a “giveaway” XL Eclipse Championships.

Incredibly, Party Poker has increased the total guarantee for the series by 75% from $20 million to $35 million. The site is likely hoping the enhanced guarantees will encourage players to compete in events across multiple sites simultaneously. Although this is not inconceivable, Party Poker seems to be pretty far down the food chain and will likely be third choice for many players.

What We Know about PowerFest VI in More Detail

Only preliminary details of the PowerFest VI schedule have been released to date. However it is known that six of the 330 events will be week-long phased tournaments with prize pool guarantees of $1 million or more. Two phased tournaments will take place each week of the series – the first having Phase 1 buy-ins of $109, and the second having Phase 1 buy-ins of $530.

It looks as if there will be two major High Roller events – including a repeat of May´s $25,500 buy-in Super High Roller that attracted 129 entries and re-entries – plus four Main Events on Sunday 24th September with buy-ins of $11.00, $55.00, $215.00 and $1,050.00. The full PowerFest VI schedule and its supporting satellite schedule are expected to be released in the near future.

From the information we have, it looks as if Party Poker has abandoned the format of dedicating separate weeks of the series to “Featherweight”, “Middleweight” and “Heavyweight” tournaments, and the series will follow a similar structure to the PowerFest series in May, when 301 tournaments with different buy-in levels were packed into fifteen days of action.

Get Ready for PowerFest VI with a $500 Bonus

If you would like to benefit from the potential overlays in PowerFest VI, and you do not yet have an account with Party Poker, head directly over to the site and create your account using the Party Poker bonus code PSITECO in order to be eligible for a 100% bonus on your first deposit up to $500. To find out more about this offer, you are invited to read our Party Poker review, which also has more details about the type of experience you can expect to enjoy when you play at Party Poker.