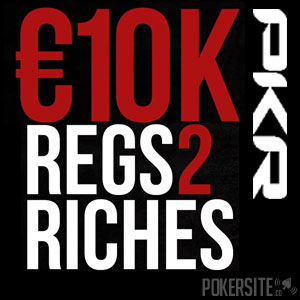 PKR Poker is hosting a novel, multi-discipline leaderboard competition throughout February which will reward 250 players with a share of €10,000.

If you like a little variety when you play online poker, PKR Poker might be a good place to spend some time during February. The innovative 3D site is running a leaderboard competition until February 23 in which players are invited to earn points by playing in cash games, Sit & Go games and scheduled tournaments.

Additional points towards a player´s leaderboard position can also be earned by playing mini casino games and virtual sports games, or by making a deposit. Due to there being a limit on the number of leaderboard competition points a player can earn in a day, this is a promotion that players of all bankrolls can profit from.

How the Regs 2 Riches Promotion Works

When you play real money poker at PKR Poker, you are awarded ten VIP Points for each €1.00 (or currency equivalent) contributed to the rake or paid to enter a Sit & Go game or scheduled tournament. In order to earn points towards the Regs 2 Riches leaderboard, players have to:

You do not have to complete every task every day in order to earn leaderboard competition points. For example, if you were to make a deposit and collect ten VIP Points by playing cash games, you would still receive four points towards your position on the leaderboard. However, you will not receive fractions of leaderboard points if you fail to complete a task. Therefore, if you were only to collect five VIP Points by playing in scheduled tournaments, you would not receive any points towards your leaderboard position.

Players can earn a maximum of ten leaderboard competition points every day. The points accumulate on a leaderboard hosted on the PKR website and updated daily (Monday to Friday). At the end of the promotion, the top 250 players will share in the prize pool, with the top player picking up €1,000 in cash. The VIP Points earned during the promotion can also be converted into cash at various exchange rates up to 30% depending on each player´s status within the PKR VIP Club.

What Else is Going On at PKR Poker?

In the past PKR Poker was often regarded as a bit of a “gimmicky” poker site because of its 3D software and animations. However, since joining the Microgaming Poker Network last year, the number of money-making opportunities has grown significantly. The value of the PKR first deposit bonus has increased to 200% up to €1,000, and the site now guarantees more than €10 million in tournament prize money each month.

One of the site´s most recent innovations – Progressive Jackpot Sit & Go games – has also proved to be incredibly popular. The three-handed, hyper turbo games were launched last July and traffic flocked to the games after three Jackpots were won during August. The Jackpots have popped from time-to-time since, but there is currently more than €½ million in liquidity in the Jackpot pools waiting to be shared between lucky winners.

PKR Poker claims in its Jackpot Sit & Go video that you can “Make Your Fortune. Fast”. If you don´t make your fortune fast, you can still pick up some extra cash by participating in the February Regs 2 Riches promotion.